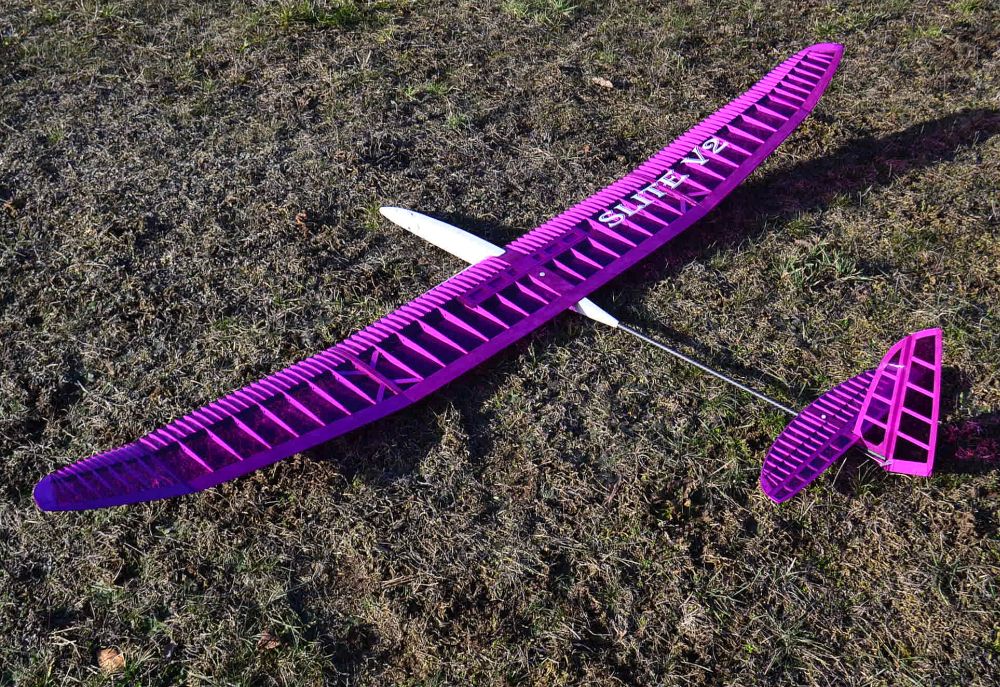 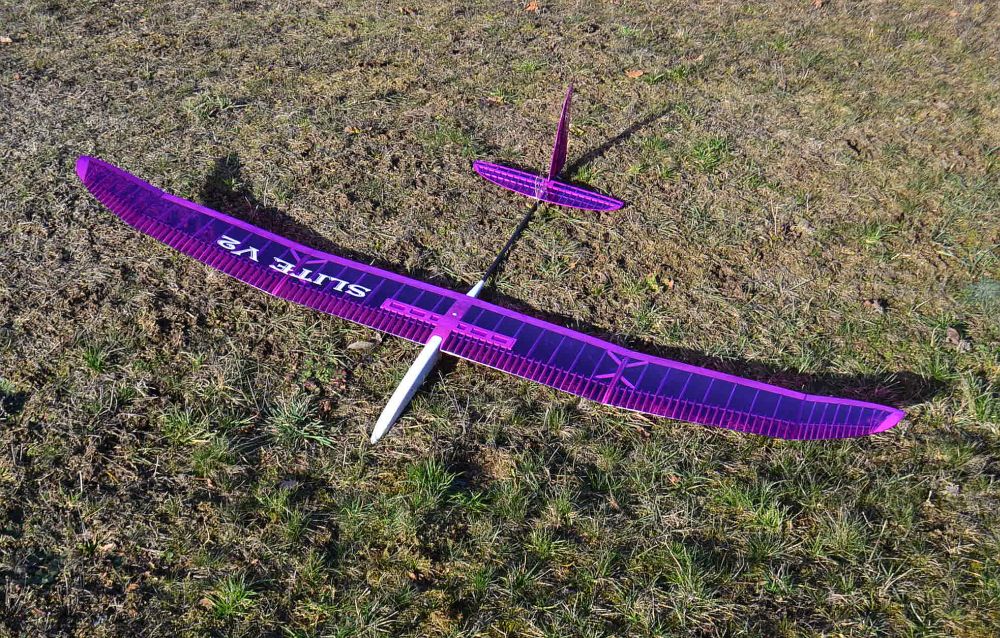 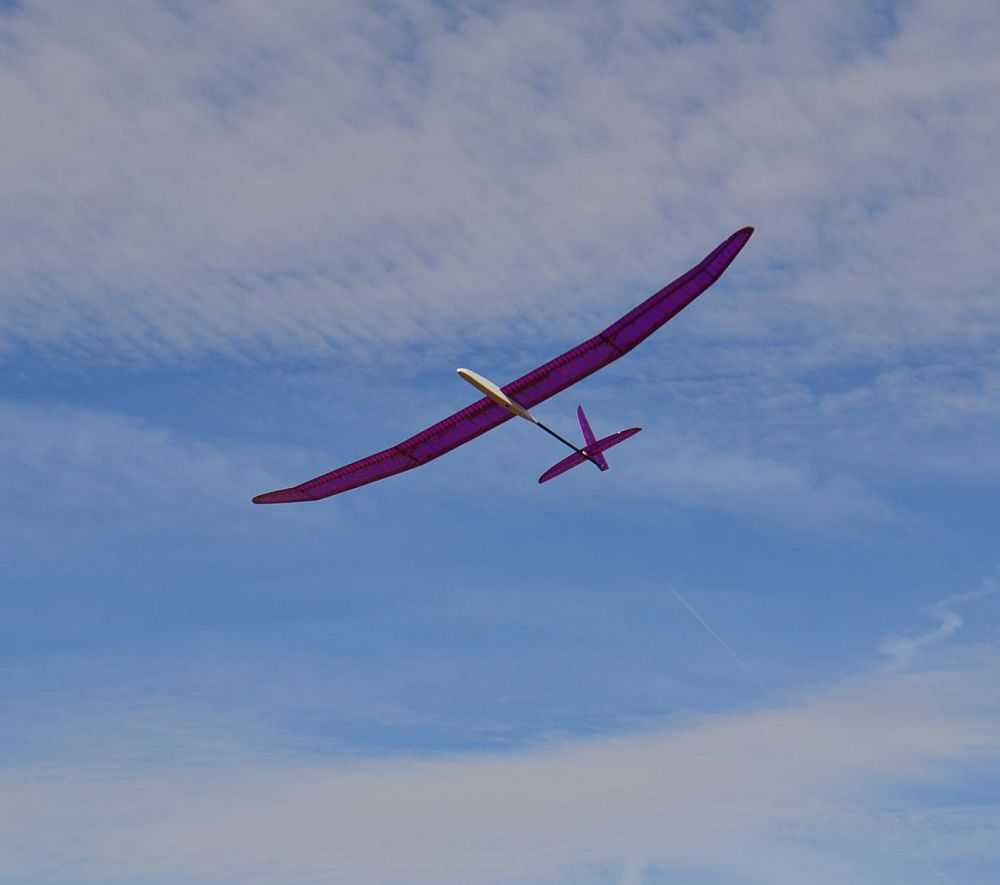 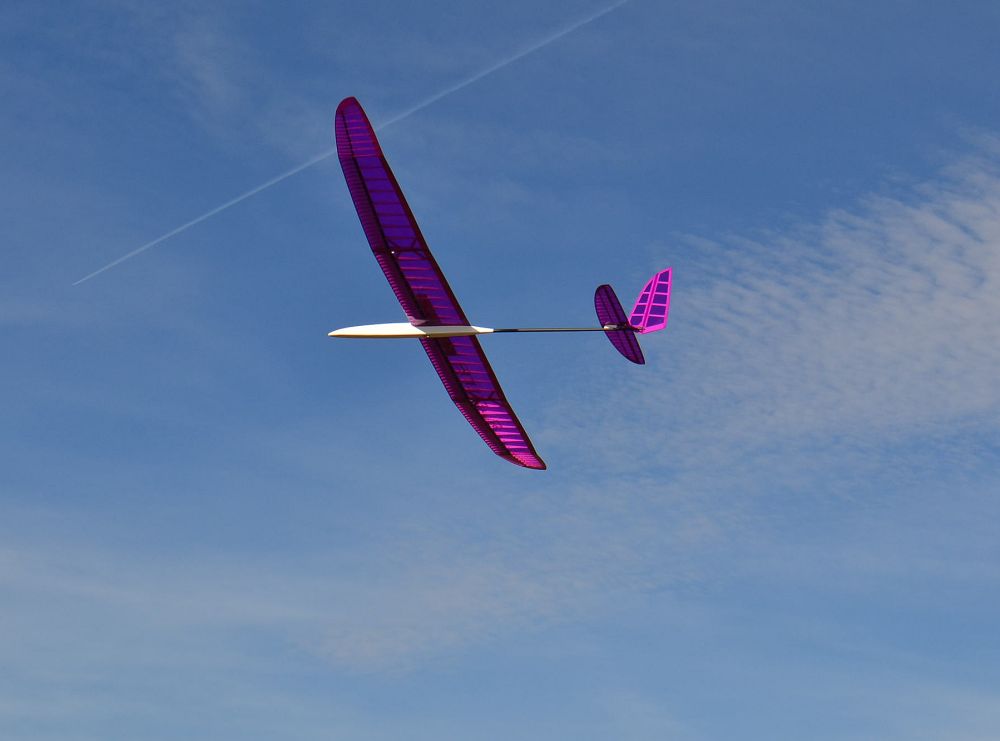 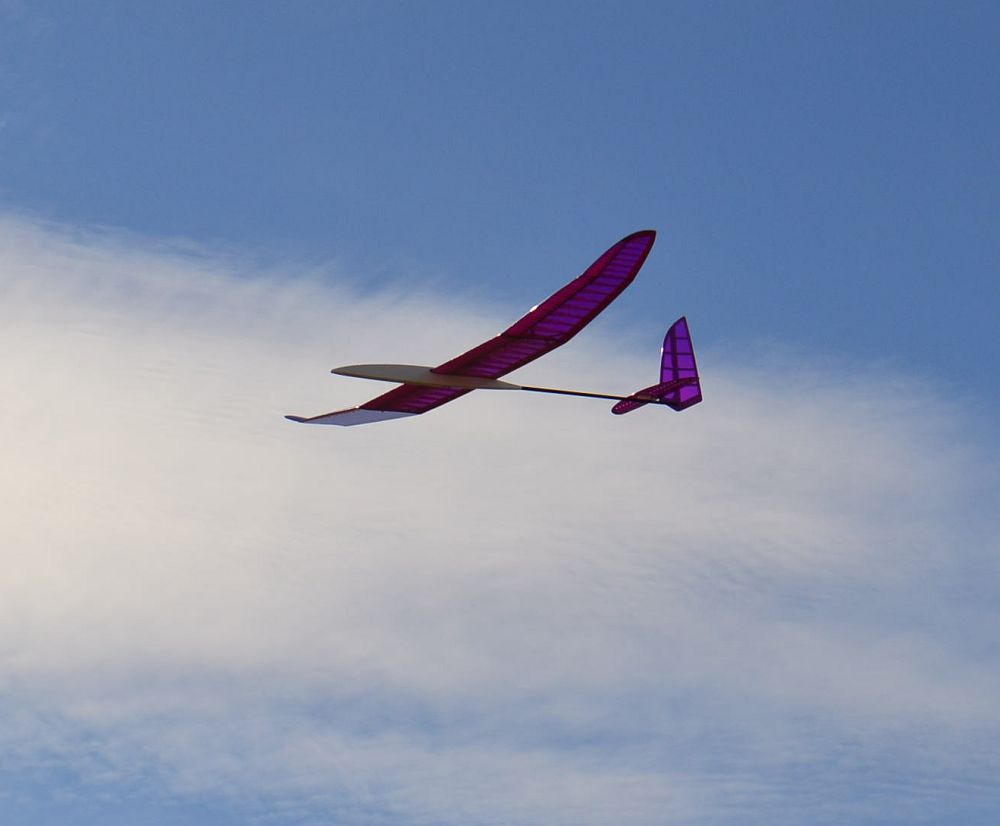 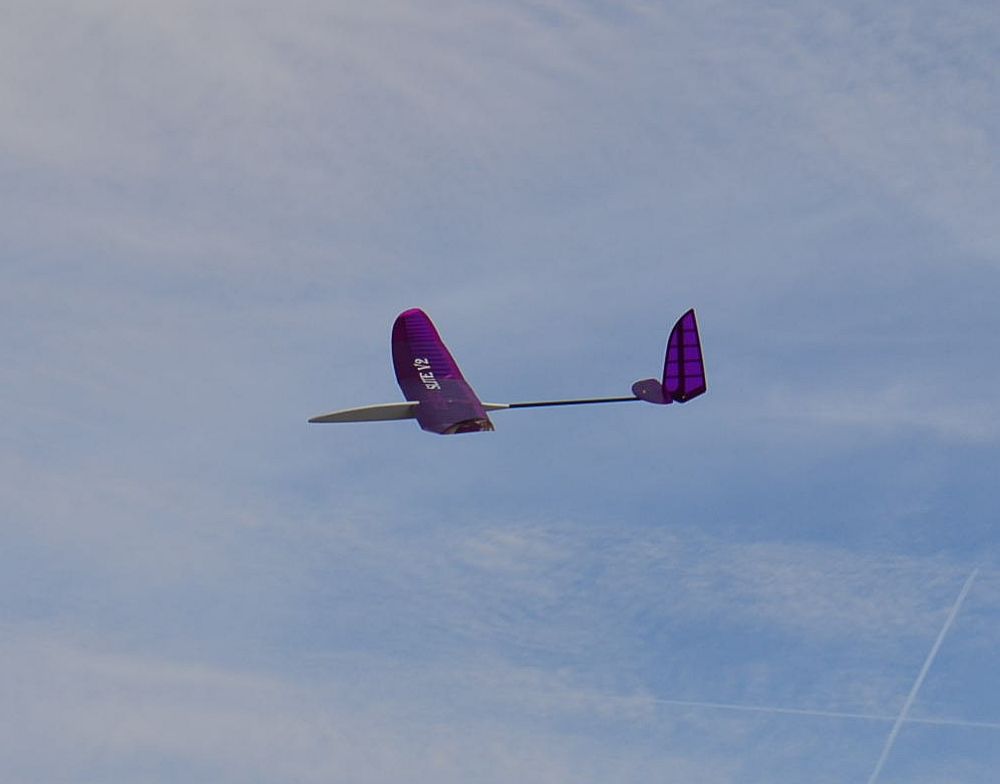 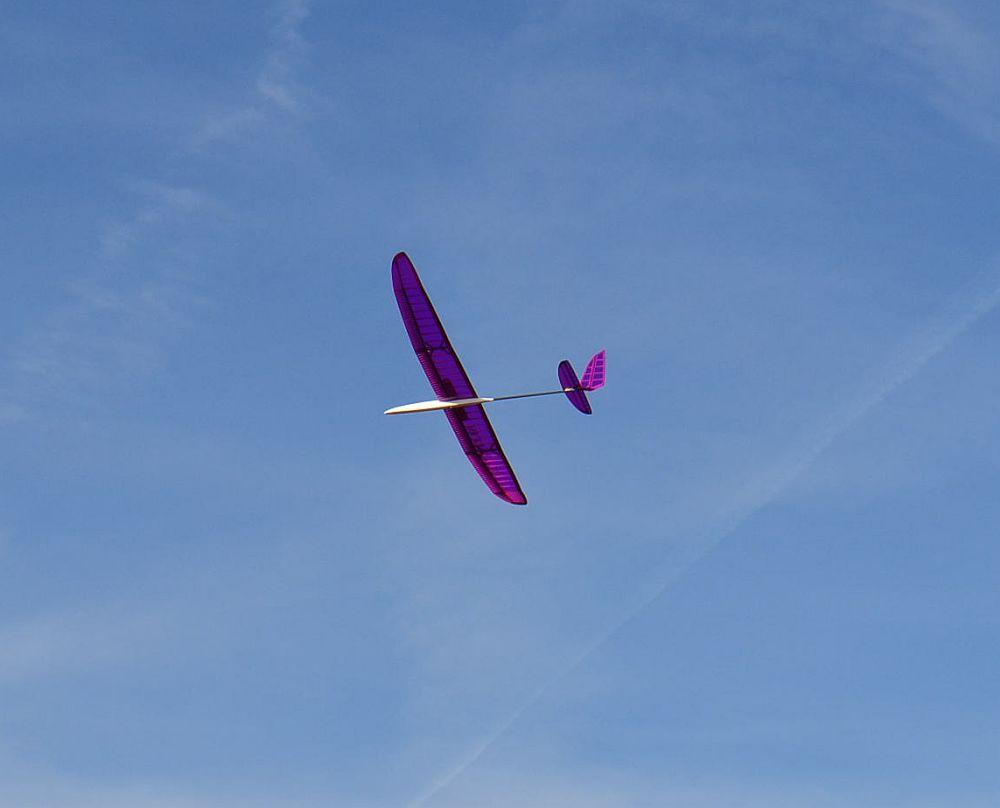 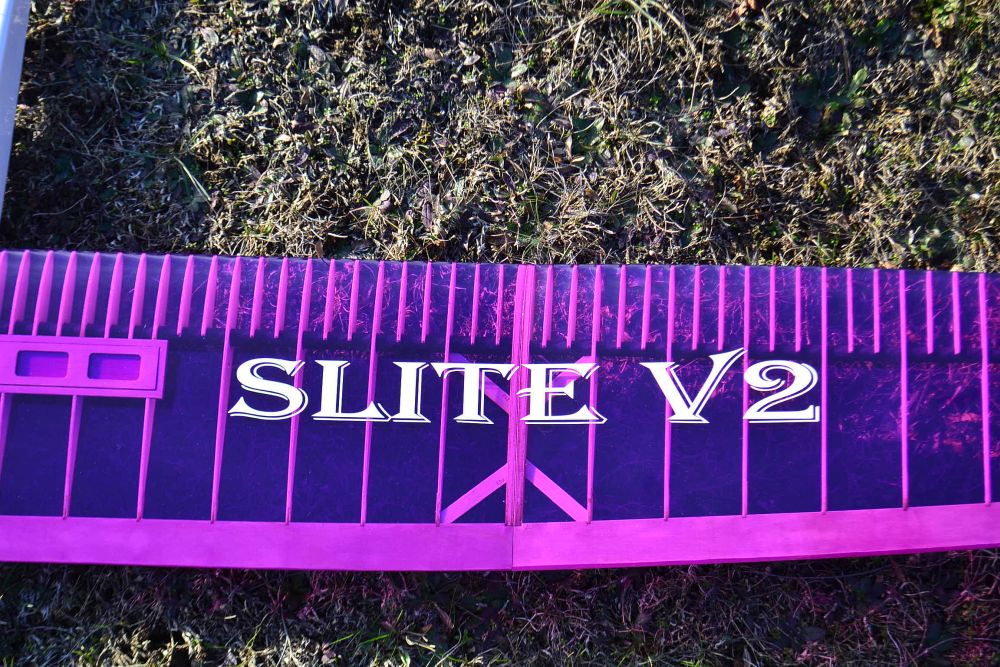 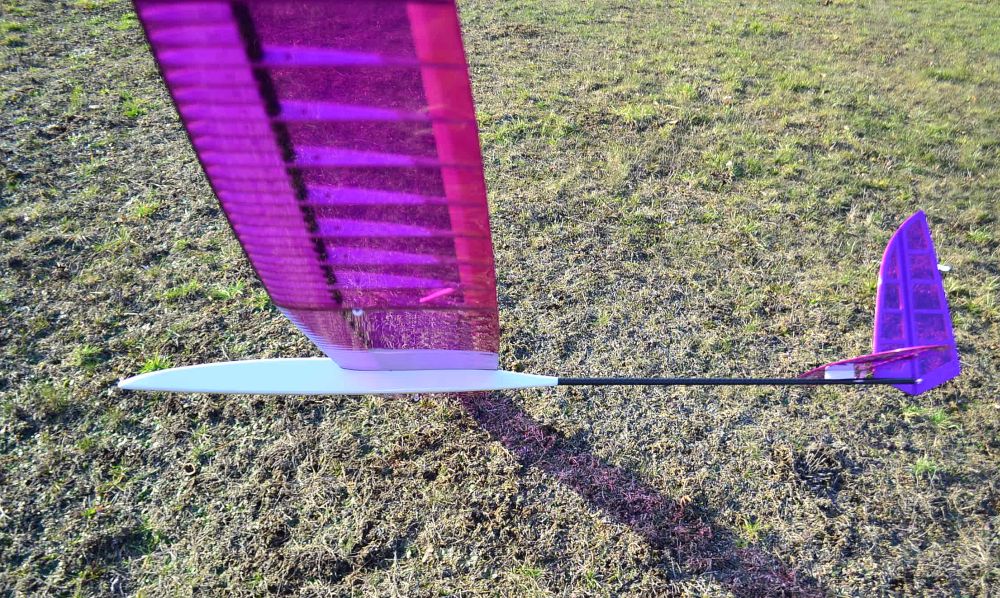 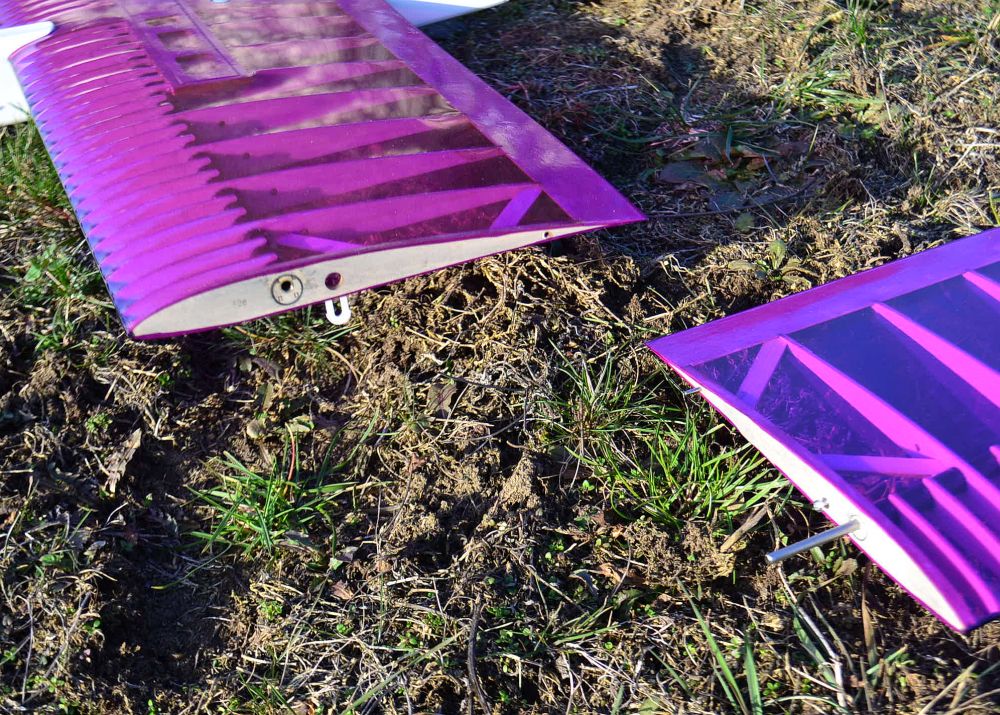 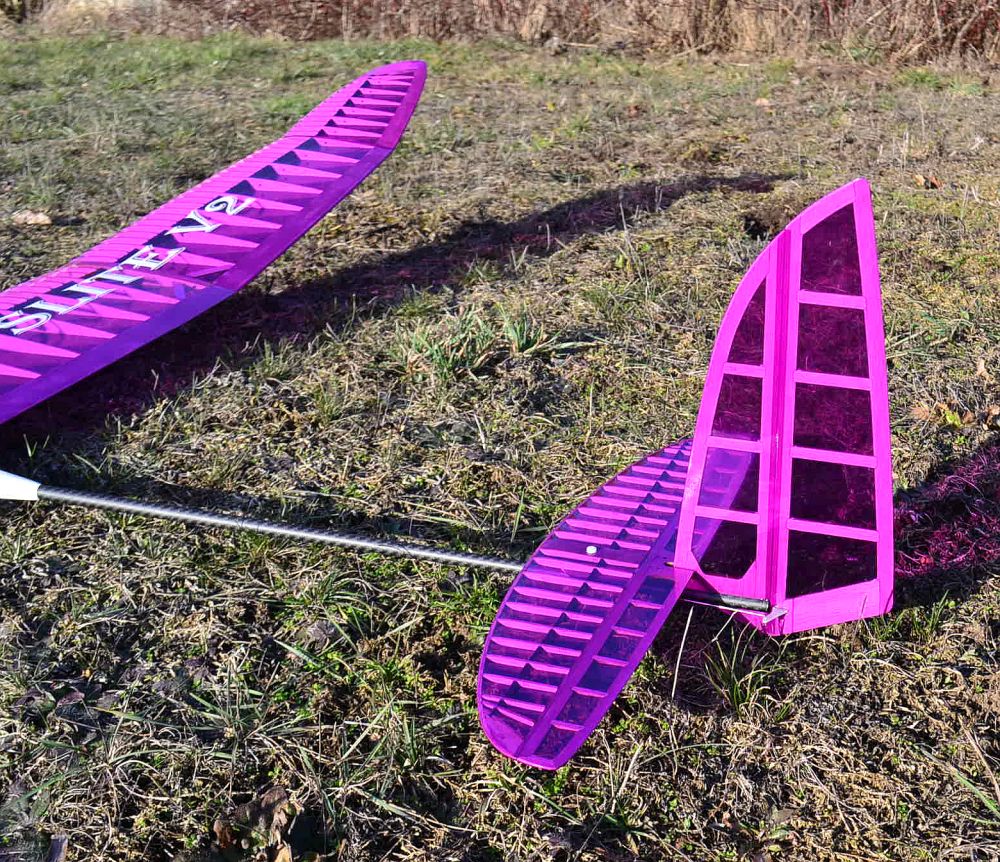 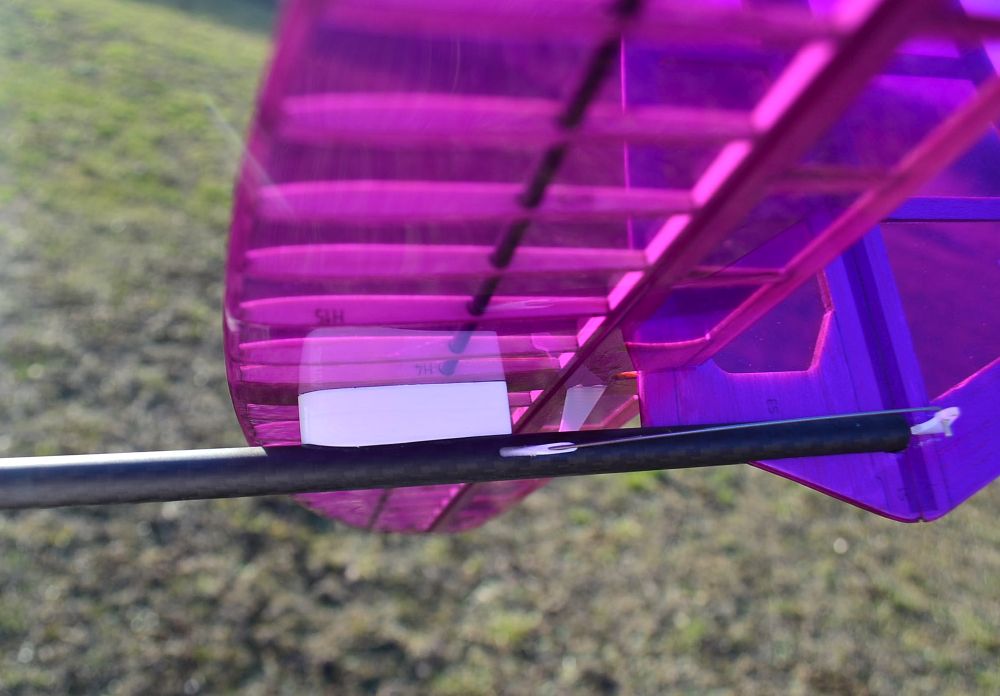 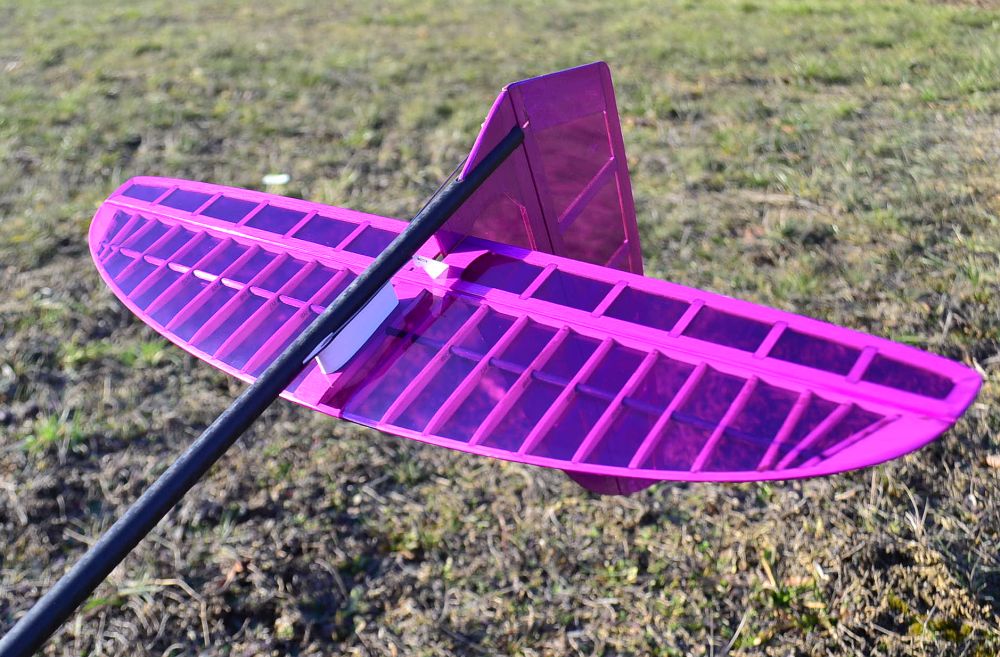 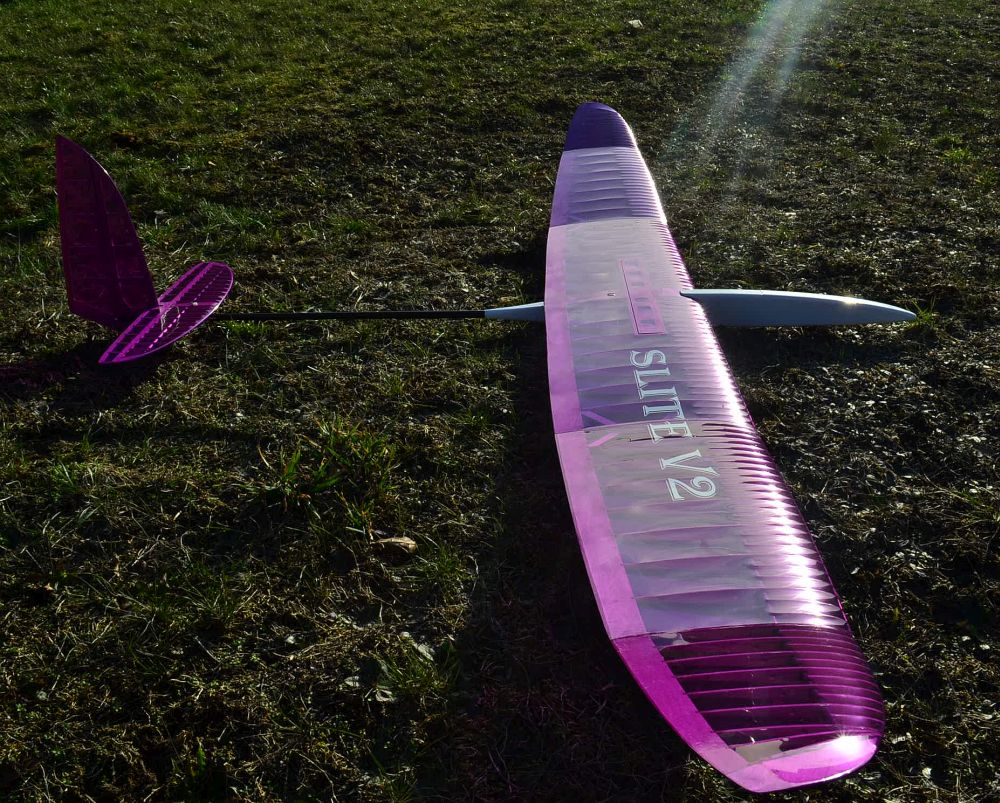 CNC-Lasercut kit from Gruener CNC, "Made in Germany" !

SLITE V2 now from the Heavenly Hoellein - How did this happen?

In 2011 Josef (Sepp) Gergetz (SETA Modelltechnik) had begun to design and manufacture a line of high quality, competition proved sailplane model kits for the at this time newly emerging class F3B-RES.
At the end of 2017 the overwhelming demand for PURES V2 and SLITE was boosting so much, that Josef Gergetz could no longer keep up with the production of his kits. Delivery times of 6 to 9 months were more the rule than the exception, and it was about time to switch the production to lasercut technology at a professional manufacturer (Gruener CNC) and to transfer the sale and distribution to a professional dealer.
So it happened, that at the beginning of 2018 we could start with the distribution of PURES V2 and SLITE V2 (since March 2019), another two high-performance wooden kits in our "center of competence for wooden airplanes". Thus the usual waiting times for the SETA-models are omitted.
From the PURES V2, which has proved its winner-type mentality in several competitions since 2012, Josef Gergetz developed the SLITE, the lighter "sister" of the PURES V2.

The kit:
We use a slightly modified strak of airfoils by Mark Drela (AG24 mod.  AG26 mod) for the wing. To ease a proper construction of the originally very thin trailing edge according to RES rules (no use of fibre composits for the trailing edge), the airfoil at the trailing edge was slightly thickened. The wing of the SLITE V2 is, as known from the PURES V2 construction, built as an open rib construction with the famous wound carbon fiber spar tubes. To reduce sagging of the covering film between the ribs, we use double amount of half ribs in the front section. This brings this beautiful wing shape closer to Mark Drela's original airfoil.
To ease positioning of the numerous ribs, we supply a positioning aid made of balsawood. This enables you to build the wing in an accurate and speedy manner. For the elevator, we supply a positioning aid as well.
We recommend the use of Graupner's DES 427 servos (highly accurate 9g micro servos with outstanding price/performance ratio) for rudder and elevator. The laser cut servo mount is already prepared to use these type of servo. Knowing Gruener, don't be surprised to find a second servo mount (without servo cut-outs) in your SLITE V2 kit, just for the case you prefer to use other servos than the recommended ones.
We have hardly modified the design, as there was nearly nothing to improve anyway. Changes of Sepp's construction are caused merely by switching to lasercut parts. and the rudder has the similar silhouette as the rudder of the Inside/Introduction.

What is new? Besides of the new lasercut production, the components are now numbered to ease building. Furthermore, there is a multicolored construction plan ("Gruener-style") and richly illustrated building instructions. The kit  is packed carefully and perfectly protected in a solid box ready to be shipped worldwide.
Wing construction
We still use the famous wound carbon fiber spar tubes, the tapered tail boom and pultruded CRP-tubes for the leading edge. The SLITE V2 has a 3-part wing and is built as an open tubular spar rib construction. The wing joiner is made of 4mm steel wire and is - as an evaluation from the Pures V2 - positioned directly in the spar tube. Due to this, we were enabled to omit some of the plywood ribs, others were made from thinner material. The inner wing (with the central airbrake) has an elliptical-like shape with no dihedral. The outer wings (also having an elliptical-like shape) are joined to the center wing with a dihedral of 8°. Like the outer wings of the Inside/Introduction, they are fixed with a specially milled plastic clip to make sure that they don't slip out during the flight. No need to tape anymore! The rib constructed tiplet is joined to the outer wing with a dihedral of 12°. For the wing we use a AG25 strak of airfoils by Mark Drela (AG24 mod.  AG26 mod). It gives high lift with comparatively little drag over a wide range of lift coefficients (Ca). Compared to the PURES V2 the SLITE V2 has an improved penetrating ability.
Construction of the fuselage
The front part of the fuselage is made from balsa with plywood reinforcements and plywood formers. Just behind the wing, the wooden fuselage joins the CRP tail boom (wound, tapered carbon fiber spar tube). The tail boom has already the cut outs for the rudder.
Two holes are already drilled for the horizontal stabilizer pylon and the slots for the bowden tubes are already milled out. The CRP tail boom is manufactured in the same way as the tubular carbon spars of the wings.
The fuselage is wide enough to fit a single Li-Ion cell with a capacity of 2600 mAh.
Construction of the elevator
The profiled (HT12 mod.) elevator is constructed with balsa ribs, CRP tubular spar and a balsa leading edge.
The kit consists of carefully selected, lasered and numbered balsa- and plywood parts. All small parts and linkages needed are included in the kit, naturally in our usual high quality.  NOT included are RC-components, glue, covering material and the Slite V2 logo. This logo you can order separately with the order no. GRU2070.R in red or with no. GRU2070.W in white.
Our SLITE V2 is a high performance model airplane. The SLITE V2 is easy to control, BUT: If you aren't an experienced in building wooden model airplanes, we highly recommend the help of an experienced modeler for the construction...the flight performances of your SLITE V2 will pay off the efforts.
We recommend 2 x servos DES 427 for the rudder and elevator and the D-Power AS 107 (identical servo: HiTEC HS-40) for the central airbrake. As a receiver battery you need a single cell Li-Ion battery with 2600 mAh.
Further information you find in the corresponding tab pages above this description.
Bauanleitung deutsch
Hoellein's choice of accessories: for this item:
LiIon-Akku 1S/2600mAh, 30A, mit JR-Anschlußkabel, Emcotec # A43015
Item no.: HA43015
Availability:(Delivery time: Item in stock. Delivery time inside Germany: 1-3 business days, Europe: 3-14 business days, remaining countries: 2-6 weeks.)

This item notice Article is noted
Tailplane for SLITE V2
Item no.: GRU2070.76.09
Availability:(Delivery time: Item not in stock. Delivery time on request.)

This item notice Article is noted
Elevator for SLITE V2
Item no.: GRU2070.76.13
Availability:(Delivery time: Item not in stock. Delivery time on request.)

This item notice Article is noted
Ribs and half ribs for outer wing 2, SLITE V2
Item no.: GRU2070.76.07
Availability:(Delivery time: Item not in stock. Delivery time on request.)

This item notice Article is noted
Ribs and half ribs for center wing SLITE V2
Item no.: GRU2070.76.04
Availability:(Delivery time: Item not in stock. Delivery time on request.)

This item notice Article is noted
Reinforcement of the ribs for SLITE V2
Item no.: GRU2070.76.23
Availability:(Delivery time: Item not in stock. Delivery time on request.)

This item notice Article is noted
Fuselage formers and belts for SLITE V2
Item no.: GRU2070.76.22
Availability:(Delivery time: Item not in stock. Delivery time on request.)

This item notice Article is noted
Plywood parts for wing joiner inside and outside for SLITE V2
Item no.: GRU2070.76.20
Availability:(Delivery time: Item not in stock. Delivery time on request.) 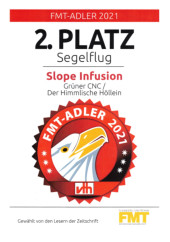 We use cookies on our website. On the one hand, these are due to technical reasons, for example, to be able to use the shopping cart. Others are used to create anonymous statistics or to improve the personal shopping experience. Further information can be found in our data protection information .